The origin of this design came to me many years ago when playing around with my pencil and sketching IOM boats as I often do.
I drew a round deck shape with no gunwale and I thought this probably would work, but I will be laughed at!!
Time went by and my son Nathaniel decided he wanted to build an IOM
OK, I said, you can design it!

Well, where  do you start?
We had a TS2 and we remember what the late Geoff Smale said to us while we were sailing at the laser 24hr race at Lake Pupuke, Auckland.
‘If you want a fast IOM just put a smaller stern on the TS2 and bring the rocker and keel forward.’

Nathaniel did this and built the Spitfire design.
We built a plug and a full mold for this boat.
Spitfire was a solid glass boat that did need corrector weights.

That boat has proved to be exceptionally fast by beating the NZ top design V 8 in our club racing.

Well , because Nathaniel was doing it, I couldn’t sit back so I got my old sketch out.
I had recently been sailing a F12 catamaran that had wave piercing bows and was very impressed with how this boat did not slow down when going for a nose dive, in fact it would always pop up again without cart wheeling.
Also it would go through any chop on the wind without slowing, so I was very impressed with the wave piercing or back to front bow boats.

So that is where I started with the D1
I could see it could possibly work as the Brit Pops and likes were going narrower than previous winning designs and a wave piercing boat would have to be a narrow boat
When I saw the chine and tumble home topsides of the Brit Pop I realized this was the way to go as it would help to lift the bow and sink the stern when leaning over.

I copied the TS2 keel rocker line and made the boat 185mm wide and made a hard curve on the bilge before the chine in section view to help with stability, I added a flat area on the stern to promote surfing and tracking in the breeze.

This boat was built using strip plank balsa that was glassed both sides.
The boat was built in female molds.
This construction eliminates any twisting that can happen when adding frames or the deck to the boat while under construction.
The boat is completely finished inside before taking out of the molds and fairing glassing outside.
When building the boat I took a bit of rocker out of the keel forward to help stop nose-diving so in effect the point of the bow was 10 mm below the waterline.
I made the boat with a case where I could change the keel position as I was concerned that it may nose dive very badly.

I guess the first thing I noticed was that when the boat nose dived it did not slow down in fact almost sailed faster when bow was going under!
The boat was noticeably slower when the keel was in the back position and also harder to control,
So the forward keel position was best.
The boat proved to be very fast especially in heavy weather with B and C rigs.

However, when training against Spitfire with A rig it became very noticeable that D1 Yellow Submarine could not tack so fast and also was not tracking the wind like Spitfire.
The boat would keep sailing in a straight line when it got a knock or a lift so I constantly had to steer the boat while with Spitfire Nathaniel could let go the controls and the boat would steer to the wind!
What was happening was the bow of my boat was acting like a rudder so while it was going fast I was missing out badly when the wind changed.
The Boat had exceptionally fast speed upwind and down wind at times

So it became obvious to me that I had to change the bow sections.
Rather than build a new boat I saw it was easier to build a new bow,
I studied the super quick V8 and designed a similar bow.
I cut a ‘v’ on both sides of the boat and again, using female molds, I strip planked balsa the new bow section.
I was pleased that the actual change in the bow did not interfere with any of the fittings on the boat.

D1 Yellow Submarine  performed like a different boat, so we now call this design D2.
It tacks way better and tracks better now in all conditions.
We have now completed molds and have produced one glass boat
Yellow Submarine II that is also sailing very well against the local Kerikeri fleet

The D2 has proved to be a fast boat

We have been putting more time into sailing skills,rig development and building lighter boats in the last year

With rig development we are starting to see benefits from using a full size adjustable mould .We have made a couple of head sails that perform particularly well

It took a while to realize that the D3 was still not on the pace . I often blamed my own sailing ability for not getting good results! D3 finished mid fleet at 2014 nationals so still a long way off the front group. It really does take a long time to understand the differences in performance in hull design because of so many variables. Wind conditions, wave conditions, foil and rudder design and positions on boat, sail shape, mast configuration and the list goes on.

Why reinvent the wheel!  The boat that won the 2014 NZ Nationals was a Britpop design so I decided I will take a close look at the shape of that winning boat and develop the wave piecing bow section that we have using on the D3 that I think was working ok

The four advantages of this bow are

The D4 was designed with  round sections aft compared to the D3 and I think this creates less drag. Max beam is the same as D3 at 185 mm . I wanted the narrowest waterline beam that I possibly could get and to do this I was finding I had to have very full sections along the keel line rather than v sections!

The bow is a very full section, almost a scow . It was very apparent to me that a successful bow shape will be one that will want to lift quickly however at the same time does not have too much buoyancy that the boat will trip over and stop downwind. There is a very fine line with the correct  amount of buoyancy in the forward sections to enable the boat to do this . Too thin the boat will dive too far and too full the boat will trip .

First off we built two boats with two different bow shapes . One had more roundness and buoyancy on the deck!

When these boats were launched we were immediately impressed how well they sailed in all conditions up wind. They had exceptional ability at tracking and turning with the wind-shifts and also when the sheets were eased a little that had very good speed. I discovered the boat sailed best with the fin in the forward position and the bulb in aft position with 2 deg cant. The bow was about 15 mm  out of the water from the stem and this helped with the boats turning ability and still was very fast in drifting conditions

Downwind it was as fast as anybody in all conditions. The boat that was finer on the deck bow sections was not recovering from the nose dive so this is where I realized that we could put more fullness in the bow sections above the waterline

I built two more boats with this shape and I also changed the deck lay out so I could change any problems with faulty electronics quickly. We put the winch aft of the mast and to my surprise this made a big impact on the boat helping it lift rather than dive downwind. The bow was even further out of the water but this did not seem to slow the boat in any conditions so that is how we have left it

With the two new boats we tested a new champagne keel . We made it as narrow as we could at the bottom and wider at the top .The theory was it will help hold the boat on position at the start line and also less lateral resistance down the bottom of the keel that cause the boat to heel more 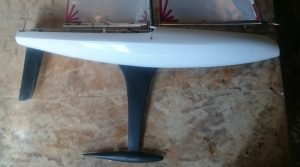 When tested against the other boat this keel proved to be better with the added bonus of the boat gaining a little more ground through the tack . In other words the boat would sailing around the keel compared to the conventional keel where the bow seems to spin down after the tack . There is one draw back and that is the boat can take longer to get out of irons however we still prefer the  champagne keel . In B rig conditions around 25 knots the D4 with this keel is exceptionally fast  when sailing with slightly eased sheets

We presently are very happy with  the way the boat sails and is set up and we now only build complete replicas of  this boat that all have compatible components. WE now are putting more effort into rig and sail development

Time goes by when your having fun

I have spent a lot of time analyzing the  design and still think it is a very good shape and dont really know what to  change to improve it.

We have been shifting the bulb forward and aft with adjustable bolts on the bulb and this helps with bow down trim for light weather and helps with performance here. It’s like having two boats for different conditions! It seems a little sensitive to weight position ,If bow down to much it will nose dive a little soon in the breeze or if the weight is to far aft the boat drags the stern in the light that slows it down! class rules won’t allow you to change weight position during a regatta so you have to set this before the first race. Not sure if this is a bad thing or good ,cetainy bad if regatta is different from the weather forecast where I got caught out once!  however I can also set it up for average wind conditions

We now use expediential on rudder . Set up 50% on the radio enables the rudder to move slowly while going straight then fast if wanting to turn sharply. I have found this a huge advantage on the wind as to much rudder movement slows the boat on the wind

Also using more twist in the sails and this has helped the boat perform better. These sought of things make more difference to performance than changing hull shape.

The latest trend with IOM boats is placing mast and fin further aft. This probably helps with  nose diving downwind . Imay have to change the design to get the lateral resistance and centre of buoyancy right to do this so I will keep working with what I have got at present